The Grandeur of Gulfstream 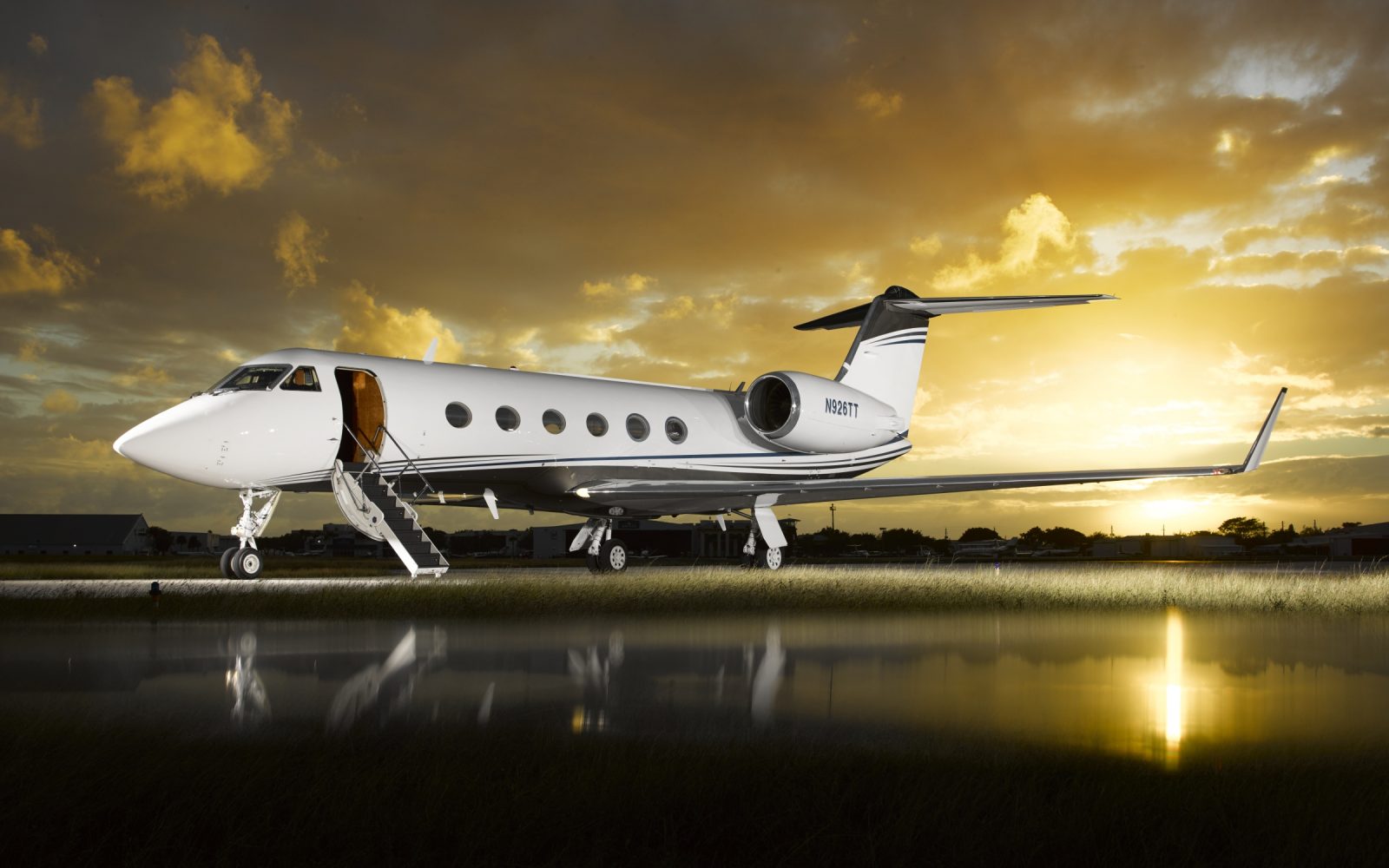 If you were to ask the average person to name a business aircraft, chances are the first response would be Gulfstream. The moniker has become embedded in popular culture, from music videos to motion pictures. Much like many of the products we use every day, the name has become synonymous with exclusive air travel. A tissue is a Kleenex®, a throwing disc is a Frisbee®, and a private jet is a Gulfstream. Since the dawn of business flying, perhaps no other brand has risen to this status nor holds the cachet of the esteemed manufacturer. Planet 9 offers a choice of four Gulfstream models for your charter needs. This history of the company and their aircraft shows how they arrived on the pedestals they occupy and why Planet 9 chooses them.

As post-World War II military aircraft ushered in the modern age of air travel, the groundwork of what would become the Gulfstream Aerospace Corporation was being laid. While the company is now known for its class-leading jets, the initial offering was propeller-driven. Grumman Aircraft Engineering first envisioned a plane, specifically with the business traveler in mind, in the late 1950s. The clean-sheet design was internally designated the G-159. However, on August 14, 1958, when the very first example took to the skies, it had been christened the Gulfstream, now referred to as the Gulfstream I, as it was the first in what would become a succession of planes. Powered by two Rolls-Royce turboprop engines, the low-wing aircraft could carry 12 passengers at an altitude of 30,000 feet with a 2,200 nautical mile range at speeds of up to 350 mph. It was a versatile platform, with variations ranging from an eight-person executive model up to a stretched configuration that could accommodate 37 passengers for airline use. During its 11-year production, 200 of the GIs were manufactured, of which dozens are still flight-worthy. The era of corporate aircraft had begun.

In the mid-1960s, Grumman split their military and civilian operations and moved the latter to Savannah GA, where Gulfstream Aerospace headquarters still exist. Building on the success of the GI and its appeal to business travelers, Grumman began looking into a jet-powered platform. What they came up with in October 1966 was the GII, a twinjet with a swept-wing and T-tail design. Much like the GI, it led the field in nearly every category including comfort and performance. In a standard corporate layout, the GII could take 14 passengers to destinations over 2,600 nautical miles away while doing so at 45,000 feet with a maximum speed of 650 mph. On May 4, 1968, the GII became the first business jet to fly nonstop from the United States to Europe. By 1980, 256 GII’s had left the assembly line with 75% of them flying to this day.

In 1978, Grumman sold both the Gulfstream line and the Savannah fabrication facility to entrepreneur Allen Paulson who took over as president and CEO and promptly renamed the company Gulfstream American. At that time, production of the GII was winding down and its successor needed to incorporate all that had made that model the benchmark of business travel while at the same time becoming the new standard. What was developed was the GIII. While it wasn’t an all-new design, it was an evolutionary advancement of the previously proven iteration. The GIII eclipses the GII in many categories, as would be expected. The GIII carries up to 19 passengers in standard seating configuration, flies 1,000 nautical miles further, was equipped with advanced avionics, and became the first business jet to include winglets from the factory, which added to its improved fuel economy. Like its progenitor, the GIII quickly began setting records. After its maiden flight in December 1979, it was certified in less than a year and soon held accolades for altitude, non-stop range, and global circumnavigation, as well as becoming the first purpose-built business aircraft to fly over both the North and South poles. The GIII’s popularity with celebrities, corporate operators, and the US Government, assured Gulfstream’s ranking at the top of private jet builders. 202 examples were produced between 1980 and 1987.

As the last of the GIII’s were rolling out of Savanah, the next rendition was already progressing from the blueprints to the runway. While the previous versions had been incremental steps of advancements on the preceding models, the GIV was going to be a leap forward. After its initial flight in September 1985, the GIV and its various derivatives would begin an impressive 33-year production run. The GIV family, including the GIV, GIV-SP, G350, and G450, would fill the skies with over 900 aircraft before being phased out in 2018. Improvements over the GIII would lead to a 300 nautical mile range hike, increased top speed, and a higher maximum takeoff weight. Most of these upgrades were due to the development of a new Rolls-Royce engine that was more powerful, more fuel-efficient, and much quieter. The GIV was the first business jet to incorporate an all-glass cockpit as well as a digital flight-management computer, both of which increased efficiency and reduced pilot workload. Fresh off the assembly line in 1987, the GIV made its presence known with a slew of world records, including westward around the world, eastward around the world, and city-pair and speed records. All told, it set nearly 70 achievements, crowning it the new benchmark of private aviation.

The 1990s were significant for Gulfstream. The GIV line was selling well, and their production facilities were expanding and advancing. They had seemingly conquered business aviation, but there was more to come. It was time for the next Gulfstream and, once again, the sights were not set on a minor facelift. Their goal was the world. When the GV began deliveries in 1997, it became the industry’s first ultra-long-range private jet. The performance offered by the GV eclipsed not only its stablemate GIV but exceeded the capabilities of any other purpose-built business jet at the time. Still powered by Rolls-Royce engines, albeit more powerful versions, it could now reach 51,000 feet with a range of up to 6,500 nautical miles, surpassing the GIV by over 2,000 nautical miles while flying 6,000 feet higher. This meant it could reach nearly any location around the globe, non-stop. Based on the GIV, the GV was bigger and better in every category. It was equipped with the most advanced avionics including a new head-up display. All this effort by Gulfstream did not go unnoticed. In April 1997, the GV was awarded the esteemed Robert J Collier Trophy for achievement in aviation along with breaking 40 city-pair, speed, and distance records. Customers also responded with 193 aircraft delivered by the end of its build in 2002. An impressive 191 were still in service as recently as 2017. Three of those GV’s are part of the Planet 9 portfolio. Each of them has been recently refurbished to offer you a choice of interior style while maintaining the technological edge they have held since manufacture.

Working on the tremendous success of the GV, the G550 is similar to the GV in many exterior and interior dimensions. Where the differences are seen is in the cockpit. When deliveries began in late-2003, Gulfstream unveiled their PlaneView™ avionics package which included the revolutionary Enhanced Vision System (EVS), allowing pilots to fly the aircraft in low-visibility weather conditions. Drag-reducing modifications improved the fuel efficiency of the Rolls-Royce engines and increased the G550’s range by 250 nautical miles over the GV. These improvements brought another Collier Trophy to the Gulfstream collection of awards, with the advanced safety and technology as primary factors for the win. Over 600 G550’s and its variants have left the Savannah factory with the final delivery expected in 2021. One look at these extraordinary statistics and there is no question why Planet 9 offers you a newly updated G550 as one of their carefully chosen fleet.

The accomplishments of the line of aircraft that led to the G550 are undeniable. It would have been easy for Gulfstream to simply improve on what had come before. However, taking the easy path was not what brought the manufacturer to the forefront of their field. So, with the competition closing on the lofty standards set by the G550, they needed to do more. And in 2012, that is exactly what they did. Gulfstream customers wanted a larger, faster, longer-range, more luxurious plane. What they were given was the G650. Beginning with an essentially blank canvas, the G650 maintains the recognizable silhouette and iconic panoramic oval windows of a G-series jet while offering improvements in every possible way. When it debuted, it was the most advanced aircraft in the industry. It could fly further and faster than anything else on the market. With a 7,000 nautical mile range, a max top speed of over 700 mph, and 2138 cubic feet of cabin space, it was leaps and bounds ahead of its competitors. An additional Collier Trophy was soon awarded. To date, the G650 and its longer-range sibling G650ER, have set dozens of speed and distance records. Planet 9 offers a late-model G650 as the furthest flying jet in its stable. Its three-zone cabin assures comfort and convenience while traveling to any destination on the planet, as there is no suitable airport it cannot reach.

Over 60 years ago, the first Gulfstream airplane took flight. From that point forward, they set the standard of what business aviation should be. Through evolutionary and groundbreaking advancements, they have continued to offer the finest jets available. That is why Planet 9 chooses Gulfstream. We want to offer you choices, but we want those options to be the safest, best method for you to travel. With one GIV, three GV’s, a G550, and a G650 on hand, all impeccably outfitted and maintained, we’re confident you will find what you desire.

Planet 9 is proud to fly Gulfstream and we hope to be your choice for private air travel. Contact us today to experience the grandeur for yourself!