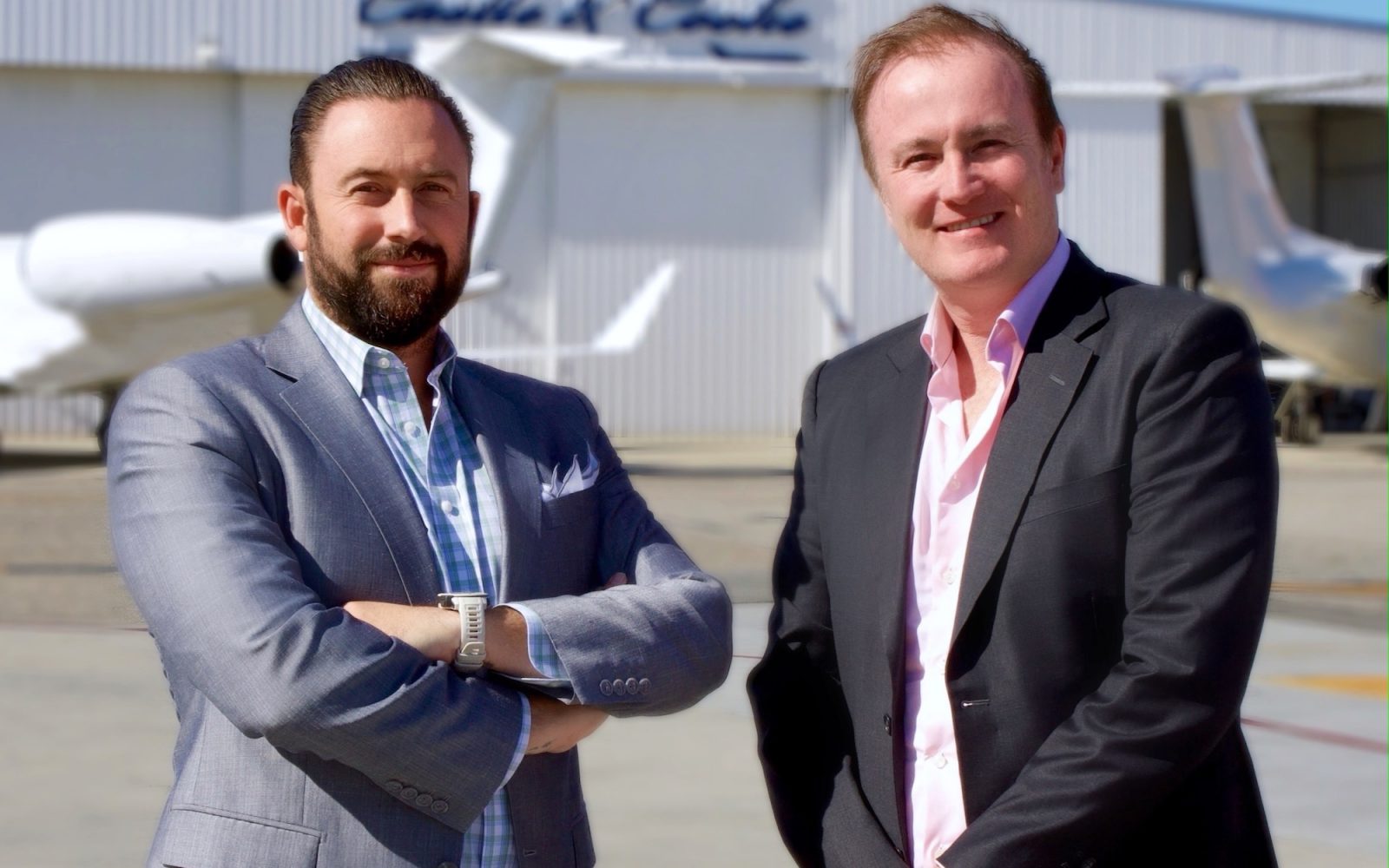 Take two hugely experienced executives, a small group of industry experts and a bold charter business plan, then add the world’s largest fleet of ultra-long range Falcon 7X trijets, and the result is Planet Nine Private Air, an unusual Van Nuys-based operator that boasts Wyvern Wingman, Argus and IS-BAO accreditation, yet is only now in its second year of operation.

Planet Nine (P9), received its Part 135 operating certificate on 22 June 2018 and by Monday, 25th its first Falcon 7X was ready for charter. The plan had always been to build an owned fleet and a second 7X soon followed. Barely had Wyvern Wingman status been achieved in October 2018 than the third Falcon arrived; the fourth entered service in March 2019.

A fifth Falcon 7X arriving early in June 2019 completed the five-aircraft owned fleet just in time for P9’s first anniversary, by which time the company was able to announce the availability of its first managed aircraft, a Gulfstream G650, for charter. By the end of 2019, a G550, GV and another Falcon 7X had also joined the roster, while Argus Platinum and IS-BAO Stage 1 approvals had all been granted.

Founded by Director of Operations James Seagrim and Director of Business Development Matt Walter, Planet Nine has enjoyed a meteoric first few months in business, basing its success on a well-conceived business plan and intimate understanding of its customer requirements.

Speaking to EVA in January, Matt Walter explained: “Our operation centres on a floating fleet model, which isn’t unique to us but enables us to serve our clients on multiple continents and provide consistent availability at a competitive price point.

“We set up with a base in Los Angeles, one in Europe and another at Teterboro, with technicians, sales agents and dispatchers strategically located at each of those locations as a means of offering point-to-point pricing between the world’s busiest charter markets. They provide a ‘line of sight’ between the West Coast and East Coast of the United States, Europe and the Middle East. We fly to Asia regularly, but more on a traditional round-trip basis.”

The plan had always been to build an owned fleet of Falcon 7X jets and focus on the ultra-long range market. “There are now ten ultra-long range airplanes in the fleet, our five Falcons, a Gulfstream V, 550 and 650, a Global 5000 and another Falcon 7X. We charter manage them all.”

Acknowledging that the business is still young, Walter nonetheless says the owned Falcons are kept quite busy. “We’ve seen growth in aircraft utilisation month over month and the airplanes fly an average of between 85 and 105 hours per month per airframe. We crew with an average five-and-a-half pilots per airplane, which supports the high utilisation and means with can crew in a fashion that allows us to give the pilots a hard schedule. We’ve found that to be key in retaining personnel in a climate where pilots are in demand.”

There’s no questioning the aesthetics and performance of the 7X, but P9’s reasons for owning the type – to the extent where its five represents the world’s largest commercial fleet – run considerably deeper. “The aircraft is highly efficient when compared to its ultra-long range competitors; it burns 30 to 33% less fuel on similar legs. Efficiency was a key component. Also, we wanted to do something different in the highly competitive US and European charter markets; we were the first to bring the Falcon 7X to market in the United States.

“The airplane is highly versatile, with the performance to fly out of high elevation, short-field airports. We’ve flown from Aspen to Moscow, for example, which is kind of unheard of for any private jet besides the Falcon 7X. It offers a lot of performance and efficiencies, which makes it a compelling story compared to its competitors in terms of the economics.”

The decision to build P9 around the Falcon 7X was further informed through examination of several corporate flight departments that were operating the type relatively intensively, while Dassault itself also became involved in the decision-making process.

“They showed us the airplane could do 100 hours per month and they were absolutely correct. We’ve done that ever since inception. We’ve been very happy with the airplane and Dassault. Many of our customers are environmentally conscious and see the aircraft as a tool that can fly ten hours plus while providing them with the most efficient option for their missions.”

Unsurprisingly, Walter sweeps historic rumblings over inadequate Dassault support, especially parts supply, away. “I’ve heard these stories over the years, but it hasn’t been our experience at all. Since we’ve been operating the Falcon 7X, Dassault has been on top of customer support. We work very closely with them. They know what we’re trying to do with their aircraft and they’ve been very responsive. I think they’ve increased parts availability on the west coast and we’ve been able to operate at high capacity because Dassault has been able to support us. We have our own trained technicians, but we work hand-in-hand with Dassault on a daily basis to keep the airplanes airworthy. They’ve been great to work with.”

“…we work hand-in-hand with Dassault on a daily basis to keep the airplanes airworthy. They’ve been great to work with.”

The OEM also plays a crucial role in the event of an AOG away from P9’s three bases. Considering a hypothetical customer stranded with a faulty jet in Moscow, Walter explained: “We have technicians based in London, but first we’d go to Dassault for support – the main priority is getting parts to the airplane. Of course, we can’t depend on them for a Gulfstream or the Global, so we have our own maintenance control, that’s the most important thing.

“Also, since all ten aircraft are, for the most part, in the same floating fleet, we’re able to recover an AOG quite quickly or launch a replacement with a tech team, whichever is the most efficient way to get the client moving again.”

Each of the managed aircraft has unique owner requirements. The owner of two of the aircraft offers them for premium charter whenever they have availability and both jets are inserted into P9’s floating fleet. “They’re not like-for-like,” Walter says, “but they’re still within our focus on ultra-long range airplanes less than ten years old and with new interiors. Then we have owners whose aircraft are available for 75 or 80 hours of charter per month. If they need to fly and their airplane’s over in Europe while they’re in LA, for example, they’re happy just to grab another jet from the fleet. It works out well for them to get the charter hours and still know they have an airplane available. Then there are owners who want their own aircraft available when they want to use it and that’s another scenario.”

Planet Nine had already gone a long way to establishing itself as a Dassault Falcon 7X operator when its first management client appeared – a Gulfstream owner. What’s the thought process that leads a Gulfstream customer to recognise a Dassault operator as the best company to manage their jet?

“The core group of people running the company have a lot of Gulfstream experience and although we chose to buy the Falcon 7X, our focus is on ultra-long range owners who want charter. Whether we place a customer on a G550, Global 5000 or Falcon 7X, it’s the same kind of charter. Our Falcons serve as the ‘charter engine’ for the company to cultivate trips in advance, with no need for owner approval; we can basically do what we want with them.

“But as the business grows, we need more inventory and that additional charter just naturally rolls onto these other owner’s airplanes. It’s allowed us to provide them with more charter than they’re used to getting from traditional management companies, because with our Falcons charter is first and foremost. These charter owners benefit from that ‘charter engine’. Management companies generally have to go out and sell charter when the hours are available, but we already have trips ‘in the can’ that we can pass on as demand increases.”

Walter credit’s P9’s ability to take on managed aircraft so soon in its existence to the way the company was built from the outset. “Even when we had just one airplane, we had the infrastructure to support 20,” he says, a fact also important in P9’s rapid receipt of the Wyvern, Argus and IS-BAO approvals. “It’s also a testament to the people we have in our management roles, people who have been in those types of position a decade or more. You need very experienced people to properly operate the type of equipment we do over as many hours every month as we do.”

And yet P9 offers far more than chartered jets. Typical of its wider product offering, in cooperation with T&M it offers global personal protection to its clients. “The majority of our flights are between the US and Europe, and into the Middle East, Asia and Africa, to secure locations, but personal protection is particularly important to some of our high-profile, high net worth clients. The security offering expands into cyber, which is becoming more prevalent all the time.”

In fact, security is but one option P9 offers its charter customers. “At the time of booking, from catering to carbon offsetting, every kind of additional service is presented. A lot of our business is repeat and so we know the customer’s requirement and might automatically offer security and ensure they fly carbon neutral.”

Through a relationship with TerraPass, P9 has carbon offset available to every client. “Our customers have been very responsive to it. Flying in a Falcon 7X and offsetting the carbon makes their footprint as small as possible while doing things they couldn’t on a commercial airliner and getting into airports where there’s no service. It’s something that set us apart from our inception, the efficiency of the airplane and offsetting. A lot of our customers are from Silicon Valley and Hollywood, and all of them are more and more conscious of the environmental impact of flying these airplanes.”

Speaking to Walter, it quickly becomes obvious that P9 is more than a business to he and his fellow executive team. “We love to come to work at an airport. The company’s heart is a small core of very experienced aviation professionals driven by love of the airplane. This is a difficult, low-margin, 24-hour, 365-days per year affair and I think passion is critical if you’re to have any longevity.

“We knew we were going to buy five Falcons in our first year and build the brand, but growing the fleet to ten aircraft exceeded our expectations. We’re being very controlled and methodical in what we do, focussing on our specific niche. Our airplanes need to have more than ten hours of range and we’re looking for specific owner types. We’re very conscious of ensuring we have the infrastructure to match the airplanes in our pipeline and since we’re the largest domestic operator of the Falcon 7X, if a customer has a 7X they want to have managed, Planet Nine is really the only choice.”

“…if a customer has a 7X they want to have managed, Planet Nine is really the only choice.”