The Pathway of the Corporate Pilot 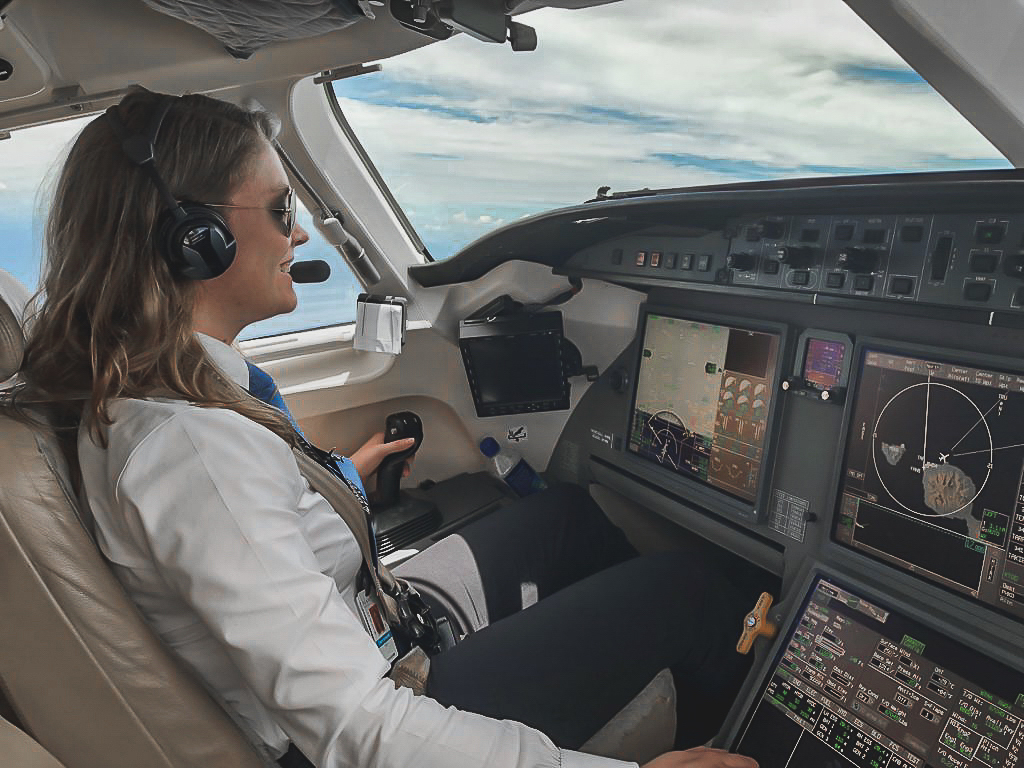 When boarding a Planet 9 aircraft, you are assured the highest level of confidence in every aspect of your upcoming flight. From the readiness of the plane to the food you will be served by our gracious cabin attendants. While there are many pieces to your travel puzzle that must be assembled to make the experience as extraordinary as you, and we, demand that it be, there is one component that you may not have placed much consideration into: the pilot. Of course, you would be accurate in assuming that the persons operating the complex, state-of-the-art jet you find yourself on are trained to the highest of standards. But have you ever thought about how they got there? What instills in an individual the desire to accept the responsibility of assuring the safe travels of you and those around you? Let’s take a look at what it takes to sit in the best seat on the plane.

If you ask any pilot, whether they are flying gliders, helicopters, or jumbo jets, they will all be able to remember that point in their lives when they were first drawn to aviation. Once it is felt, there is a magnetism so strong that it is inescapable. Even if aviation never becomes a career, it will somehow become a part of their persona. For many, they are captivated from a very young age. “I knew I wanted to be a pilot when I was 10 years old,” recalls Planet 9 First Officer Claire Schindler. Navigating the corporate aviation minefield, where roughly 5% are women, Schindler knew she had a daunting task ahead. But she also knew she was hooked, this is what she wanted, and nothing was going to deter her. The initial spark that ignites the fire of aviation rarely goes out. And that flame needs to burn brightly as the goal of piloting, especially in the corporate world, can take decades to achieve.

The Training and the Cost

For most people, the first steps down the long and undulating trail to becoming a pilot start with an introductory flight at a local airport, usually in a small plane. That $99 adventure is the bait to lure those hungry for aviation into what will become a long and expensive endeavor. And it works. It is not unheard of for passengers on these excursions to immediately sign up for flight training. Assuming one can meet the somewhat stringent medical standards of the FAA, the first step will be attaining a Private Pilot License, or PPL. Costs will vary based on location and type of plane but expect to spend a minimum of $10,000. This is the opening of the door to personal flight. Any thoughts of an aviation career are many years and many hours away.

Plenty of aspiring flyers will stop with their PPL. However, if their goals are loftier, this is just the beginning. Next will come a laundry list of necessary ratings. Commercial (which allows them to be paid to fly), instrument, and multi-engine are the requirements. The admission price at this level can be well north of an additional $40-50,000. But they are far from finished with training. The holy grail of employment as a pilot is the Airline Transport Pilot rating, or ATP. While this can add tens of thousands more dollars, it also carries additional mandates, including age and more rigorous medical testing. However, the largest of the hurdles to clear is the accumulation of flight hours.

Each rating and certification a pilot earns has a minimum number of hours for each step, and these hours do not come free. It is not uncommon for fledgling pilots to accept excruciatingly low pay, just to accure those hours. An often-utilized approach to building time is to teach other people to fly. Planet 9 Pilot Tom Walsh took this route. Unlike many who view instructing as a necessary evil, Walsh took a different viewpoint. “I was so thrilled that I had gotten this far in flying that I thought, if I have to instruct for the rest of my career, I will have made it!”, he expresses. He did not stop there. The two years he has been with Planet 9 are but a fraction of his more than three decades of flying and many thousands of hours at the controls.

The cost is not only financial. The pilot life, especially at the start, can be very transient. Jobs come and go, forcing relocation or extensive commuting. A “normal” work week does not exist in this profession, where working 20 days, followed by 20 off, is not unheard of. Frequent travel, while also a perk, can involve unusual hours, multiple time-zone changes, and not often knowing where you will be sleeping the next night. Any semblance to a 9-to-5 job is thrown out the window early on. Add a family to this mix and the complications expand exponentially. Planet 9 Captain Shaun Barry sums up the experience of many impassioned aviators when he remembers his early days. “As I was gaining experience and ratings, I had to deny myself instant gratification, because my focus was to acquire my ratings and learn everything I could.”

So, they’ve spent the money, they’ve got the hours, they’ve paid their dues. Now the job is theirs, right? Not so fast. While networking can be important in many jobs, it is a necessity in the corporate aviation world. Open positions are not often advertised. The friend of a friend approach is the method most commonly used for finding qualified applicants. The majority of corporate pilots have been plying their trade for several years and have met many others with similar qualifications along the way. So, when a slot opens up, they tend to reach out to acquaintances to fill the vacancy. The aviation world is the smallest big industry you’ll ever find. Everybody seems to know everybody. Getting one’s foot in the door can be the biggest challenge. Even then, it can take several years, or even decades, to find that highly sought-after spot.

Remember those flight hours that are so expensive and difficult to come by? The minimum requirements for entry into the corporate landscape are some of the highest in the industry. While a pilot can make it into the cockpit of an airliner with as few as 1500 flight hours, they can’t even think of applying for a company flight department or jet charter operator unless they’ve got two to three times that. And employers may or may not expect them to be rated in the exact aircraft the business operates. More cost, more hours. For those that make it, though, they will tell you it is worth it. In the end, it is a dream realized and that has no price tag.

With all of these obstacles in their way, why do they do it? Many career choices demand far less time and cost and all but assure employment at the end. It could be argued that the medical profession may not be as demanding. Over 60% of corporate pilots have bachelor’s degrees and over 15% have master’s degrees. And that education is on top of the flight ratings. But it’s doubtful that any other line of work offers what flying for a living can, especially once they’ve been bitten by the aviation bug. The nature of the work, of course, allows for travel, but it can be to locations never before imagined, even eclipsing the locales seen by an airline pilot. Many that you ask will tell you that it is more of an adventure than just a job. The unusual schedules actually become a perk to most and the pay, once they are established, can be quite respectable.

Then there are the aircraft. Yes, if one goes to the airlines, they will fly some nice planes, which likely won’t compare to the caliber of machinery found in modern charter and corporate fleets. Just take a look at the offerings from Planet 9. The Falcon 7X, Global Express and an assemblage of Gulfstream’s including G650, G550, and GV’s. These are some of the most advanced aircraft on the planet, jets that any aviator would dream of taking to the skies. They are also aircraft that can rarely be found outside the realm of business aviation. If pilots want to fly the newest and the best, this is the track their career must follow.

Another often referenced personal reward is that feeling of worth to the employer, that you are making a difference. This sense of value most often carries through to the service that is provided to the employer. Planet 9’s Captain Berry explains it well when he says, “Being a corporate pilot goes way beyond just the ability to fly an aircraft. It is a demonstration of leadership, integrity, customer service, and a well-rounded knowledge of the industry. And I strive to show that in service to my clients, crewmembers, ground personnel, and to everyone I meet. Customer service is not a snapshot of a moment; it is a lifestyle.”

It is this dedication to performance that is reflected in every pilot that heads off down that pathway of the corporate pilot and finds themselves with Planet 9. That stroll never ends in the flying world, it just has new goals and experiences to be conquered. As FO Schindler states, “Every flight is a learning experience and I catch every bit I can. I’ve found my niche with Planet 9 and I continue to learn and grow.” Pilot Walsh echoes her sentiments when he proclaims, “This is the best company I have worked for in my 32 years of flying.”

So, the next time you board one of our aircraft, perhaps you’ll stop and think about the men and women sitting up front. Think about what it took for them to occupy those spots. They didn’t get there by chance or as an afterthought. For every one of them, it has been a lifelong dream, a passion and desire to fly the best of the best and to provide you the safest passage to wherever you may be going. Their dreams have come true. Let Planet 9 do the same for you.