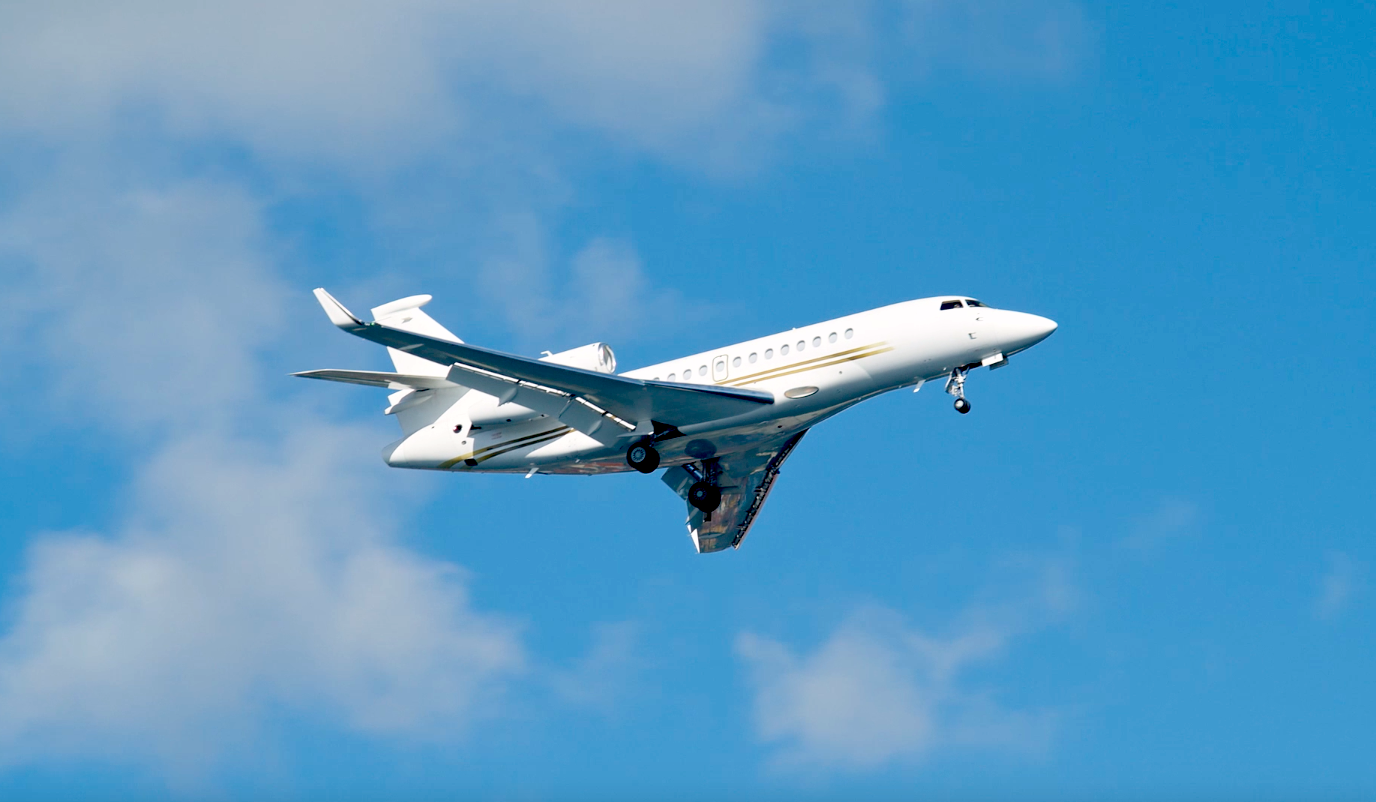 Choices. That is why you fly private charter. You have a choice between the lines, limitations, and inconveniences of commercial air travel and the near limitless, time-saving luxury of private aircraft. In the charter travel world, decisions aren’t made for you; they are made by you. Whether it is the departure time, the destination, the entertainment, or even the food, the preference is yours. But beyond these options, there lies one that you may not have considered: the number of engines on your aircraft. Why does this matter? And why has Planet 9 chosen the Dassault Falcon 7X trijet as its original aircraft? To understand these questions and more, we need to step back to the beginnings of transoceanic jet flight.

Two vs Three (or More)

The commercial Jet Age began shortly after World War II when the de Havilland DH 106 Comet took to the skies in 1949. The British Comet was the first jet aircraft designed specifically for the demands of the airlines. The introduction of commercial jets would begin the ever-advancing realm of travel. Distance and speed constraints would soon become a thing of the past. Over the next decade, the Comet would be joined by the Boeing 707, Douglas DC-8, and Soviet-built Tupolev Tu-104. With the exception of the Comet and its four engines, until the late 1950s, all commercial jetliners were equipped with just two engines. As passengers began to seek more and more distant locales, including overseas, the decades-old limits placed on twinjets would become a problem.

Although their propulsion system was new, the jet-powered aircraft were still restricted by rules placed on their piston-driven forbearers. At the time, there was a regulation that allowed aircraft to only fly a route that would keep them within 60 minutes from a diversion airport. A diversion airport is one that is capable of handling an emergency landing for the aircraft in question, based on the ability of a single engine to take the aircraft to that airport safely. This is known as Extended-range Twin-engine Operational Performance Standards, or ETOPS. ETOPS still exists but has been modified for more modern aircraft and their advanced, more reliable engines. However, in the 1960s, the only way around the 60-minute rule was to add more engines to the airplane. And that is exactly what manufacturers did.

The first truly successful aircraft with more than two jet engines was the venerable Boeing 727, which debuted in 1964. It was built for 22 years with over 1800 examples delivered to airlines around the world. Boeing’s own 747 took things a step further by adding a fourth engine and an upper passenger deck in 1969. The late 1960s also so the introduction of the McDonnell Douglas DC-10 and Lockheed L-1011 TriStar, both of which were three-engine, long-distance platforms. And while these were all popular for commercial airlines, it was rare for aircraft of that size and cost to be utilized in business aviation. To fulfill the needs of the corporate traveler, a jet-powered plane with the ability to meet the ETOPS rules was needed. One company recognized this as an opportunity to revolutionize private flight. That company was Dassault, and their solution was the Falcon 50.

The Falcon 50 began a 32-year production run in 1976 when it became the first three-engine jet aircraft designed specifically for the business aviation market. The super-midsize, long-range plane was flown by a two-person crew and could comfortably carry eight passengers for over 3500 miles. While these figures were substantial, they were easily matched by other biz jets of the day. But no matter the capabilities of those other models, none but the Falcon could meet the ETOPS rules, thus making it a go-to choice for transoceanic flights. The resounding success of the Falcon 50 led to the development of the next Dassault trijet, the Falcon 900.

The Falcon 900 entered into service in 1984 and is still made to this day, with over 500 examples having been built by the French manufacturer. The 900 took everything that made the 50 so well-received and improved on it. The 900 is wider, longer, holds more passengers, and flies further and faster at higher altitudes with more efficiency. Although these improvements met the needs of the most demanding travelers of the time, needs change. In the case of business aviation, there are always demands for bigger aircraft that can go even further and faster. Once again, Dassault was up to the task.

Further, faster, larger, and more luxurious. Those were the goals set forth for the next advancement in a long-range trijet put forth by Dassault’s loyal customers. Lofty goals, indeed, but the next aircraft to wear the Falcon name would not only meet them but exceed them in unexpected areas. In fact, when the initial Falcon 7X delivery was completed in June 2007, many of its features were industry firsts. According to Dassault, this was the first aircraft in history to be designed completely within a virtual environment. While that may not be noticeable to the average person, the next time your board one, take a look to the left and you will see a revolutionary cockpit.

Missing is the flight yoke, the device in front of the pilot used to control nearly all aircraft ever built. In its place is a joystick mounted to the side panel, next to the seat. This is made possible by the 7X being the first-ever business jet to incorporate a fly-by-wire system. What this means is that instead of a physical linkage to the aircraft control surfaces, inputs made to the sidestick go to a computer that then manipulates the plane. The system has multiple redundancies to assure that there is never a loss of control. The intent of the fly-by-wire system may have been for more precise and intuitive flight characteristics, but the result of this design is a reduced workload for the pilots, decreasing their fatigue over the potential 12-hour flight, of which the 7X is capable. For you, the passenger, the benefit is an unprecedented smooth ride.

Aiding in that ride is another first for a Falcon: winglets. These are the upturned portion at the tip of an airplane wing. The biggest benefit of these is assisting the aircraft in traveling through the air more efficiently by reducing drag, thus requiring less fuel. The byproduct is, once again, a smoother, more stable ride afforded by the increased stability of the entire plane.

Other features that you will experience in the 7X is a cabin that is one of the larger in the industry. Headroom is over six feet. Wall to wall is nearly eight feet across. From the cockpit door to the rear baggage storage is 39 feet. The numbers add up to over 1,500 cubic feet of space. What that means for you is an enormous three-zone cabin with 28 large windows, outfitted in custom luxury of the highest quality for up to 16 passengers. Incidentally, just like the development of the aircraft, the interior is designed and constructed using 3D virtual environments. And of course, it comes equipped with state-of-the-art entertainment options and onboard WiFi.

Other notable numbers to consider are the 5,950 nm range and .90 Mach top speed. Translated, that means traveling from Los Angeles to Europe or Tokyo at nearly 600mph. While en route to your destination of choice, you may be flying at 41,000 feet, but the environmental system of the 7X will make the humidified, refreshed air that you are breathing feel like 3,950 feet. This assures that you will feel rested and invigorated when the wheels touch down. And these remarkable figures all fall within one other number: 50dB. That cabin sound volume level is below even the finest automobiles and it is one of the lowest of all business jets.

As you can see, the Falcon 7X can hold its own or topple most competitors in the business jet world. Which begs the question, why the third engine? If those ETOPS rules no longer apply to business jets, why does the 7X still carry that extra, expensive engine when no other manufacturer does? The answer is two-fold, safety and efficiency.

There is no question that the jet engines of today are exponentially more reliable than those of 50 years ago. Pilots and airplanes are both tested to perform when encountering an engine failure. On the 7X, in the rare event of an engine loss of power, there is no need to resort to single-engine performance as it is now still operating on two engines. Other areas that the 7X excels in are takeoff and landing. Regulations require that aircraft must be able to depart the runway when an engine fails. With a twin-engine configuration, this means only half the power, which in turn necessitates a longer runway. With the 7X, losing an engine equates to only a one-third loss of power, allowing takeoffs from high-altitude, shorter runways, those which twinjets cannot use, such as Aspen and Cannes. When landing the Falcon, with its extra sturdy gear, can land at 90% of its maximum weight. This allows for fewer fuel stops.

One would think that having three engines versus two would be less efficient, as there are one-third more engines consuming fuel. However, what that third engine allows is for the 7X to return its impressive performance figures while demanding less power from each engine, translating to a more efficient flight. Combined with an aggressively-raked, new wing design, equating to a fuel consumption 15-30% less than similar jets, it returns a best-in-class carbon footprint.

Our Choice and Yours

Dassault has been building business trijets for over 50 years, making them the experts in the field, and currently the only builder of this type. With the list of groundbreaking industry firsts, it is no wonder that the 7X is still considered one of the most technologically advanced aircraft ever built. It is also no wonder that when searching for a leading jet for a charter fleet, Planet 9 looked to the Falcon 7X as its original aircraft. So, when evaluating your many options in private air travel, don’t forget about that third engine and all that it offers. The choice is yours, as it was ours. We chose the 7x and we hope you’ll choose Planet 9.

Contact us today for a personalized quote and experience the Falcon 7X for yourself.